It never fails that lots of people get Memorial Day and Veteran’s Day mixed up. Facebook, on either occasion, has photos of family members who have served regardless of whether they died in the service. Memorial Day, of course, is for those who made the supreme sacrifice while on duty. Veteran’s Day is for anyone who has served in any branch of the military. You may be asking, “What has this got to do with anything?” Well, as I’m pondering the upcoming July 4th weekend, the service personnel that protect us in our country’s uniform; the doctors, nurses, and all medical staff that are fighting against COVID; the scientists and lab workers doing the grunt work of coming up with a vaccine and those willing to be guinea pigs for the common good, and lots of others strike me as being “in the service,” too.

When thinking of service, first responders come to mind, and last responders, too. The police and anyone in law enforcement, EMT’s, volunteer and professional firefighters, and anyone in what we call the “service industry” can’t be left out either. According to those familiar with labor and statistics, the “Service Sector” includes teachers, housekeepers, painters, plumbers, and even preachers. There are lots of professions that are service-oriented.

Most of you know that I like humor, but lately there’s precious little to find funny. For instance, in thinking about the phrase, “the service,” there’s a story of a little boy standing with his Dad in a church’s lobby, the narthex. The lad points up at a plaque on the wall and asks his father what it is. His Dad says, “It’s a memorial for people who died in the service.” The little boy then asks, “Which one? The 8:30 service or the 11 o’clock?” It’s not very funny because people have been dying in the service of justice and freedom for over 200 years so that we can even have an Independence Day. An interesting thought is why we call our worship time, a “worship service.” Guess what? It’s not called a “worship service” or “church service” because we serve God, but because God calls us together so God can serve us. We have a wonderful example of selfless service in Jesus.

With July 4th upon us with all of the turmoil that our country is facing with COVID, racial tension, civil unrest, and an overall sense of anxiety, we need to pull together and EVERYONE be of service. Can’t we lay aside partisan bickering which has gone way past that lowly threshold? Can’t we model Jesus who stood up for truth, but did it through washing Judas’ feet and dying an ignominious death on a Roman cross? I am begged to ask the important question, “In whose service am I serving?” Am I following God’s example in Christ, or some less than helpful motive?

“In the service” is a phrase that reminds me of the BBC’s “Upstairs, Downstairs” and “Downton Abbey” where someone like the character of “Carson” takes pleasure in a job well done while serving others. I think we can all differentiate between those who serve with their hearts in it, and those who are working for a paycheck. Since when did we turn servanthood into a platform for the selfish disregard of others by treating people made in the image of God with disrespect? The United States needs to be a place where we all want to serve, not out of selfishness, but where our passion is on display for the sake of E pluribus unum – “Out of many, one.”

That phrase strikes me as a summation of St. Paul’s 12th chapter of I Corinthians that likens the church to a body where every part is important, and Jesus is the head. Our dilemma in our freedom-happy me-istic society is that we have replaced Jesus as the head and have become Hydra, the many-headed god of Greek mythology where if you cut off one head, two would grow back in its place. Now, I know Jesus isn’t the head of the US. No, we’re not a theocracy, as attractive as that sounds, but we have certainly fallen from our perch of common decency to a form of extreme democracy. Everyone’s individual indignity, justified or not, is often treated as important as everyone else’s complaint. Oftentimes, it is more important.

It’s hard to celebrate that kind of self-absorbed Independence Day. How about an Inter-dependence Day, instead? The “American Dream” has been a myth for some groups for way too long, but that shouldn’t keep us from working together to straighten things out. Take Native Americans for an example. It’s a limb worth crawling out on to say that I don’t know of any one group more mistreated, but taking “service” to mean military service, American Indians have enlisted to protect our freedoms at a rate per capita higher than any other ethnicity in our entire history. All I can say is, “Wow!” with profound thanks.

Are there more coronavirus cases in the US than in Russia and China because of more freedom, and less government controls? If it’s because we’re more free then what do we do to slow it down? Servanthood. Here’s a simple test of our level of servanthood: Can social distancing and wearing a mask be our patriotic duty? Is it our Christian duty? Our behaviors in the midst of this national and international crisis should be to go beyond the Golden Rule. We must treat others better than we want to be treated. Many of us have touted with pride that there are so many people who want to come to America, as if that makes us the best nation on the planet. Is that still the case, or have we let selfishness ruin our reputation? Have we made “independence” look less desirable? I pray not. 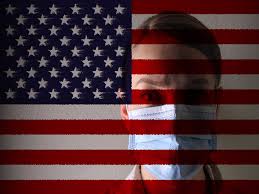 Going to seminary in Boston was wonderful. Living on the North Shore was exhilarating with its historic towns of Salem, Rockport, Gloucester, Ipswich, Marblehead and Swampscott. The sea air wisped throughout the campus. The ocean froze in the winter with floes left behind as the tide went up and down. The seafood was superb!

Cindy and I will never forget staying in the home of members of the Boston Pops. Part of what makes the Fourth of July so special to us is listening to the Pops play Aaron Copland’s “Fanfare for the Common Man” and Tchaikovsky’s “1812 Overture.” “Pops Goes the Fourth” on PBS isn’t to be missed!

However, with all of New England’s patriotic fervor and sites I am reminded that the bulk of the Revolution’s cost was borne by Southerners. New England gave the American Revolution its philosophical underpinnings and treatises while Southerners fought most of its battles with South Carolina having had more Revolutionary battles than any other state. Think about the movie “The Patriot” to catch glimpses of King’s Mountain, Cowpens, Charleston, Camden, and Buford’s Massacre. Thank God for backwoodsmen and Over-the-Mountain Boys in addition to the Swamp Foxes of the Lowcountry.

July Fourth is a holiday that should rouse the weakest spirit. It is the triumph of the farmers and shopkeepers, the little people, over the high and mighty ranks of Redcoats. It is indeed “Fanfare for the Common Man” including women the likes of Betsy Ross and Molly Pitcher, African-Americans like Crispus Attucks the first martyr of the Revolution, and American Indian tribes doing their part, too. What makes America so special is our common humanity. We don’t relish elitism. We are all here because we escaped somewhere else, except for the Native Americans, and African-Americans brought here against their will. If we will but remember our shared pain, travails, and triumphs, America will yet be a beacon of hope to humanity.

All this makes me think of the little church that I’ve been passing on a regular basis. It’s located on I-77 near Winnsboro, SC. The church’s sign is a bit out of the ordinary. The name of the church is “New Independent Methodist Church.” The logo, however, is the Southern Baptist symbol which is pretty appropriate, actually. Southern Baptist churches have by-laws each unto themselves in their congregational polity. This is much too independent for my liking. As I think about Independence Day 2012 and ponder our life together as United Methodists, there’s no such thing as an independent Methodist church. We’re all connected and I’m glad! We’re a dependent denomination. We depend on God and each other!

That’s a good reminder for America, too. Indeed, as I think about who we are as Americans and United Methodists, I’m drawn to the fact that our history is a multi-colored and multi-cultured tapestry. We’re meant to be a melting pot of diversity not a salad bowl with lettuce, then cucumbers, tomatoes, etc. topped by whatever dressing in a top-down hierarchy. Our political system shouldn’t be about who’s in office or has the majority. We’re in this thing together and better not forget it!

American democracy and United Methodist connectionalism work best when they’re horizontal not vertical. What we hold in common trumps special interests any day. As for me this Fourth of July, I’m going to celebrate it as American Dependence Day. We need each other. Together we can do more! Happy Fourth! Think dependence more than indepedence!