As a preacher I have found myself trying to drum up enthusiasm for all kinds of things. Stewardship campaigns are aptly named because it carries a military connotation. If it takes a “campaign” to get people to give then the war is already lost. We clergy-types want people to sing with gusto, give cheerfully, and serve faithfully. We want to pay off that building loan. We want the numbers in attendance to stay up without a slump, rain or shine. We like enthusiasm.

Not too much or it’s distracting, but we rather have a few smiles while we’re preaching, if not a few people saying “Amen!”  But, “Happy Clappy” people can turn a good worship service into a free-for-all with little decorum even though there’s evidence in the Bible to promote clapping in worship and even dancing! The bottom line is that everything that we do is to glorify God, not anyone else. Unless it brings honor to God, we’ve failed in our worship! I think we know when to clap at a worshipful rousing anthem by the choir. The joy just rises up from the congregation and spills over into overt enthusiasm.

You’ve heard the story of the circuit-riding preacher who needed a new horse. He went to someone who told him that he had the perfect horse for him. He said that the horse understood religious language. If you wanted him to stop, you said, “Amen.” If you wanted the horse to go, you said, “Praise the Lord!” The preacher bought the horse and started on his way when he came to a steep cliff. He couldn’t remember how to stop. Finally, as he was about to go over the edge, he remembered that you had to say “Amen” to stop the horse. With great relief, he then said, “Praise the Lord!” and both horse and rider plunged over the edge. Some people are too reluctant to say “Amen” and others are too quick to yell “Praise the Lord.” Enthusiasm does not need to be blind emotionalism. We’ve all seen people go off the religious deep end, and are so heavenly minded they’re no earthly good.

That being said, most of us preachers do like feedback on how the sermon went. Often we subject ourselves to the brutal honesty of our spouses and children. Humor us and tell us how it went, gently and with courtesy, and show enough enthusiasm to let us know you got the point. I think that’s the purpose of enthusiasm. It shows the Good Lord that we’re on the same page with Him. We want to be enthusiastic disciples!

Have you ever been to a football game and sat beside someone who either acts like they have no interest in the game or knows nothing about it? It’s annoying at best. They stand at the wrong time, clap in the wrong places, and they don’t usually look at the field! You wonder what in the world caused them to be there. Maybe it was a free ticket or something, but, at least, you wish that they had researched the game – something! There are a lot of people in church and outside the church who profess faith, but act like they don’t know a blooming thing about the Lord. God help when these folks get put on a committee. It’s usually a disaster.

We need enthusiasm! We need people who want to REALLY know Jesus and make Him known! Lent is our church season to wake us up. It should be a time when we rise every day to an ever higher crescendo of discipleship. I’m not talking about somber dull faith. We need folks who are on fire for Jesus with enthusiasm overflowing. John Wesley, our Methodist founder, said of our movement’s success and its cause, “Set yourself on fire with passion & people will come for miles to watch you burn.” Amen to that.

The story is told about a city man who was riding along at 55 mph when he looked out the window and couldn’t believe his eyes. He saw a three-legged chicken running beside the car. He accelerated to 60 mph and the three-legged chicken kept up with him! At 70 the chicken took off and left him in the dust. The man pulled over dumbfounded, and stopped in a farmer’s yard.

May our enthusiasm keep us from being caught by laziness or a lack of faithfulness. Let’s outpace the world and outrun the Devil! Run on! 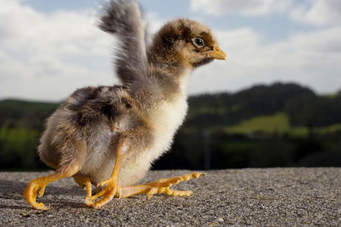