There are a lot of anxious people around. With all of the fear-mongering with the election coming up, there are plenty of upset people. The stock market is diving and the death rate is climbing. Being cooped up together is making some folks absolutely sick of each other. Sending our youth and young adults off to school has everyone in a tizzy, and God bless the teachers to stay safe and calm in the mix. Here’s to hoping that when the clock strikes midnight on December 31, 2020, we can all shout “Hallelujah! We made it!”

But, what if we can’t? What if the other fellow gets elected, or if all the votes still haven’t been counted by the deadline? What if COVID-19 mutates with the flu, and things get worse instead of better? Handling adversity and toxic people is an art. If you’re one of those persons who needs to get a certain amount of continuing education every year, then getting your Ph.D. has been a cinch in 2020 because all of our worries and troubles have been Piled Higher and Deeper this year.

To top it all off, everybody’s feelings are on their sleeves. You can’t seem to say “love” without making somebody mad. Fred Craddock, great preacher and story teller, said that he and his wife Nettie had a neighbor who liked to rain on their parade almost every day. Fred said that the neighbor would read the paper just to see what was on at the theater, and then tell him or Nettie, “I noticed such-and-such a movie is on. Have you seen it?” Fred said that sometimes he’d say, “Yes, and have you seen it?” He said it was then that he discovered that she had sucked him right in to her judgmental negative attitude. Her usual reply was, “No, I haven’t seen it. I don’t think Christians should go to the movies.” Fred said that he and Nettie finally caught on to the fact that, “She got more pleasure out of not going to the movie than we did in going to the movie, and then she doubled her pleasure by indicting us for going.”

Who are the passive-aggressive types trying to rain on your parade? Passive-aggressive folks say something innocuous that almost seems nice, but they trick you and suck you in like Fred Craddock’s neighbor. They ask things like, “Do you think that color looks good on you?” You might not care a whit about the color, but after they ask their question you’ll think about it for the rest of the day. Which kind of critique bothers you more, or does the most harm: the direct attack, or the subtle innuendo of someone who asks, “Do you think your hair looks good that way?”

I prefer direct attacks, but this year has me maxed out. Common decency has gone out the window. It is either uncommon or non-existent. Rage, rioting, and rebellion are rampant. Whatever happened to mercy and forgiveness? Can’t we talk to each other in calm helpful ways? Our current atmosphere is so tinged with negativity that everyone acts like a mudslinging politician, or like the people who are getting rich off their tell-all books that smack of little more than simple revenge.

Ah, revenge! I’m reminded of the story of the three guys who were captured by a group of tribesmen on the Amazon. One was a Frenchman, one an Englishman, and one was an American. The tribesmen told all three that they were going to die, be skinned and their flesh used to waterproof the tribe’s canoes. Out of some tiny bit of mercy, they would let each of the foreigners pick their own method of demise. The Frenchman said, “Poison,” then gulped it down while shouting, “Vive la France!” The Englishman said “Pistol,” and said “Long live the Queen!” The American said, “Knife,” and starting poking holes all over his body, then exclaimed, “Good luck waterproofing your canoe with my skin!”

We would rather hurt ourselves than let somebody else get their way. As they say, “Revenge is a dish best served cold,” in other words when it is least expected and is a surprise. Unfortunately, our society is self-destructing before our very eyes, and we’re inflicting pain on ourselves, even if it hurts us. We may say, “It’s no skin off of me,” when it really is. Instead of serving up revenge, why can’t we all just settle down and do our best to make it to a post-COVID, post-Election, post-whatever-ails-you place where we can all look back and say, “Thank you, Jesus?” 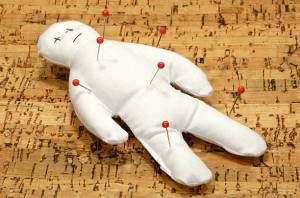