This is the longest month of March on record! It’s not because this one has more than the usual 31 days, but these days have dragged on and on, and most of us have languished. The corona virus has unleashed so much havoc that it’s hard to believe that it was just a month ago in February that we had stock market highs, COVID-19 was only a blip on our radar, and life was pretty much normal. March has wiped out thousands of lives, and hundreds of thousands in everyone’s retirement accounts. I can’t wait for March to end.

I’ll probably feel the same way about April, but time has seemed to stand still during these days as we have sheltered in place. Days seem like weeks, and weeks like months. Is this our new normal? If it is, what do we do with it and how do we handle it? As I anticipate next week’s observance of Palm Sunday and Good Friday, it feels like we’re stuck in a perpetual Holy Week, and Easter hasn’t come.

Things can turn on a dime, can’t they? The loud hosannas of Palm Sunday turned into shouts of “Barabbas!” just a few days later. In Jesus’ life and ours, things can go quickly from adulation and good times to denial and the worst of times. This kind of tumult isn’t new. It’s just new to most of us. One minute we’re fine and enjoying life, and the next minute we’re scared to go outside. Some of you know this kind of about-face because you’ve seen tragedy before. One minute your daughter is alive, well, and everything is right with the world, and the next thing you know there’s a cop at the door, a somber doctor in the family consultation room, or an officer and chaplain walking up the front steps. Life is fickle.

People are fickle, too. They can and will turn on us. Woodrow Wilson knew both the height of popularity, and its quick demise. He was elected president before WWI, led us as a country through to victory, and had high hopes that he could create the League of Nations so that what had transpired in the trenches of France would never happen again. He wanted WWI to be “The War to End All Wars.” Unfortunately, his plans went awry. Not only did the US Senate fail to ratify the Versailles Treaty to end WWI, but they also rebuked Wilson’s idea of the League of Nations. He went from being a conquering hero to a broken man. He had a stroke in 1919 in the midst of all the stress, and served his last two years in office while completely bedridden.

Life is tough and filled with bad news. People praise us one minute and spit on us the next. What do we do with it, and how do we handle it? Jesus rolled with the punches, and stayed strong. Holy Week and its up and downs served as a crucible that forged more determination in him. Sure, he prayed in the Garden of Gethsemane that he could be spared, but he also made the proclamation, “Not my will, but thy will be done.” That’s commitment. That’s playing the long game, and having a stick-to-it attitude that cares not one whit what people think.

That’s what we need during these difficult days. We should do the very best that we can, and trust the rest to God. It is the essence of the Serenity Prayer: God, Grant me the serenity to accept the things that I cannot change; courage to change the things I can; and the wisdom to know the difference. Amen. 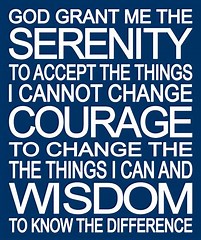 15 thoughts on “Holy Week, COVID-19, and The Serenity Prayer”